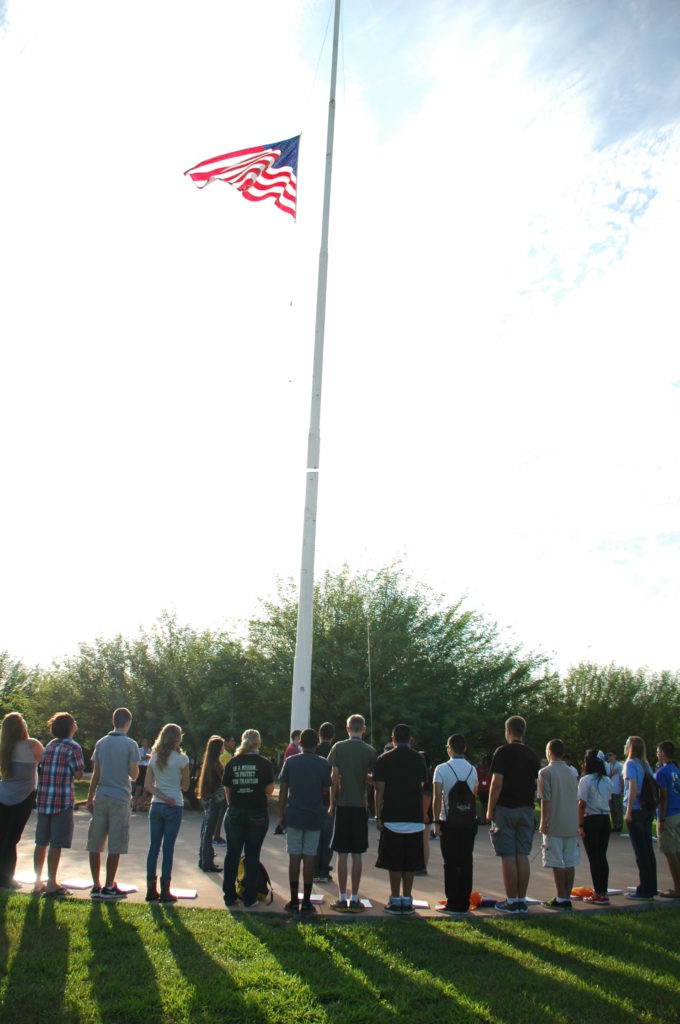 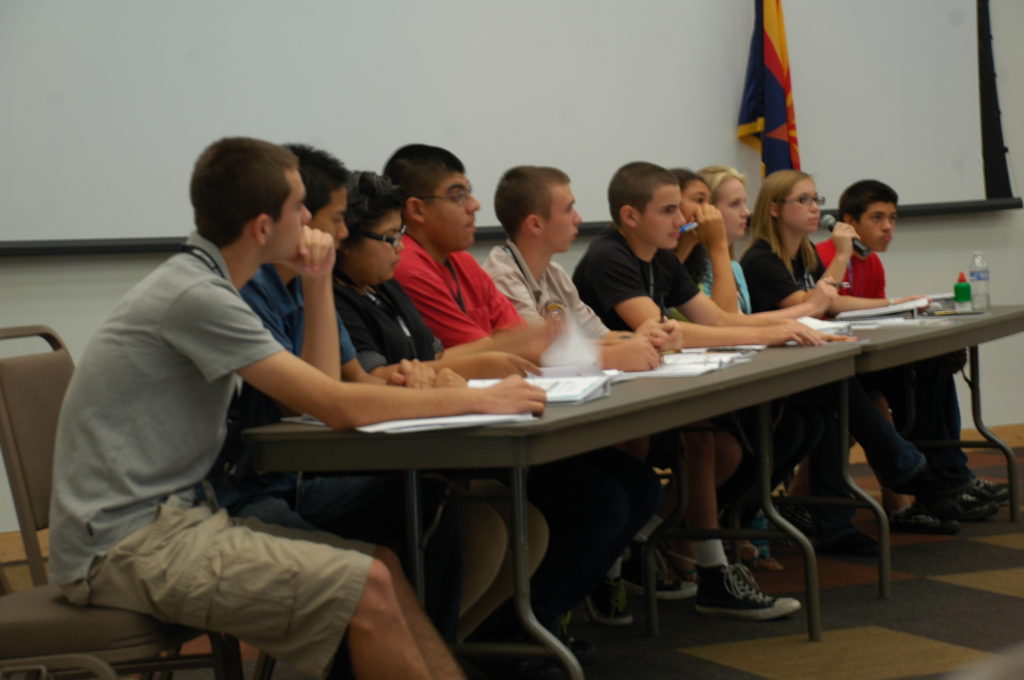 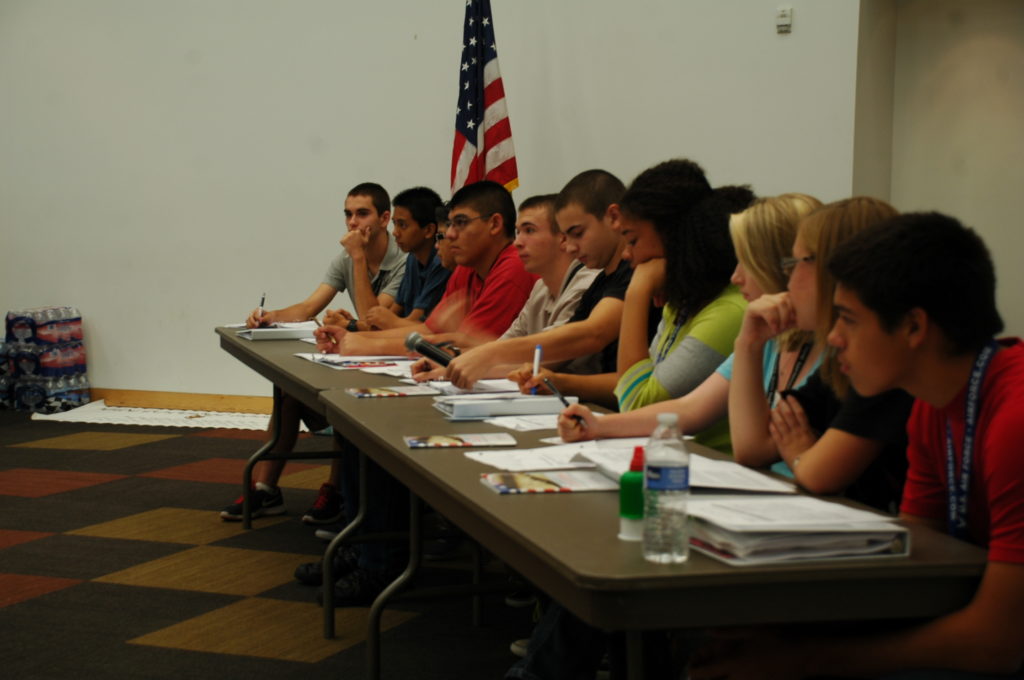 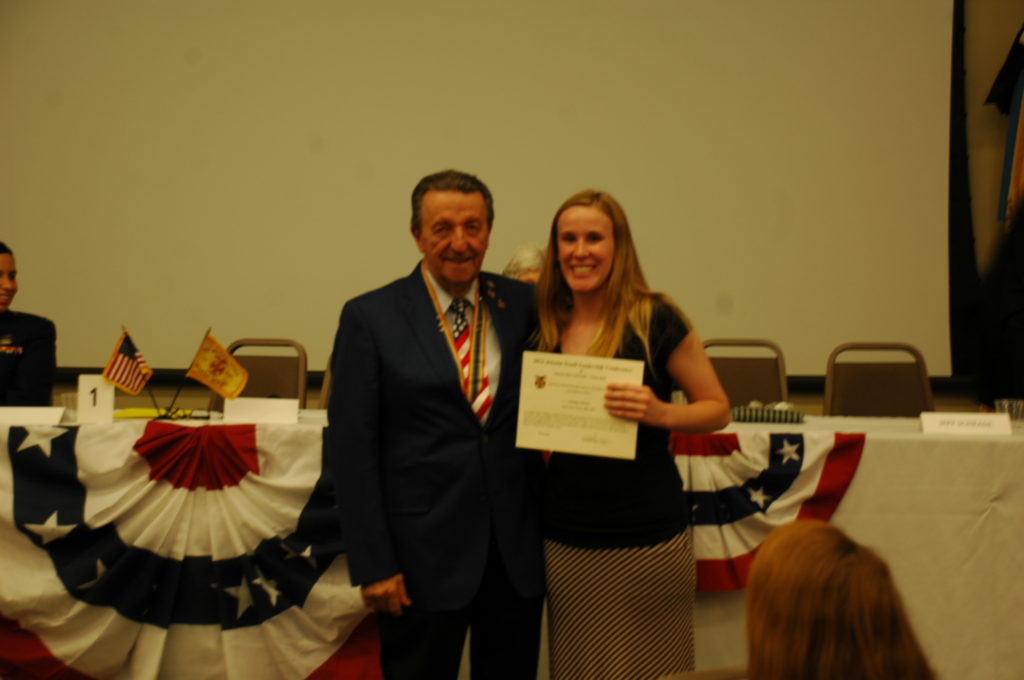 The Governor of Arizona each summer declares “Arizona Youth Leadership Conference Week” to recognize the importance of preparing Arizona youth to participate as active and contributing citizens. The 23rd annual conference was held at ASU’s Polytechnic campus in Mesa, AZ led by COL Richard E. Minor, USA (Ret). The week began on Tuesday with the arrival of 67 delegates and immediate grouping into teams. With an emphasis on teambuilding, activities included icebreakers, flag building and folding, communications class, a declaration of independence class, and an ice cream social.

Wednesday the delegates began with “Leadership and Your Potential” where they were challenged to think through tough scenarios and decide a course of action. Next they sat down to write essays on The Posse Commitatus Act of 1878 declaring their opinion on US armed forces guarding national borders. The Best Essay award went to Kennedy Wright (Marcos de Niza HS), with runner up going to Shannon Weinstein (Tombstone HS), and second runner up going to Conner Smith (Desert Ridge HS). Delegates went on to participate in Responsible Citizenship where each learned about their country, state, county, and district, determining their representatives and understanding the importance of voting. The night ended with the Leadership Reaction Course (LRC) where delegates were given the chance to show what they had learned throughout the day.

Thursday opened with an introduction to the events leading up to the Constitutional Convention. They then lunched together by the state of the founding father whose persona they assumed. After deciding on their state’s main issues, the class used parliamentary procedure to write their own constitution. Afterwards, teams presented PRO and CON sides to constitutional issues such as free speech, same sex marriage, and compulsory health care. The remaining teams voted for the side presenting the better amendment to the constitution. The day concluded with motivating life lessons from esteemed Companion George Burk USAF (Ret) and an open Veteran’s panel that included a representative from each military branch.

The last full day of the conference centered on Free Enterprise, taught by Assistant Director Jeff Schrade. Students traded candy and produced origami to simulate the US economy. Delegates formed corporations, experienced taxation, and initiated mergers and acquisitions on their own to maximize their candy payoff at the end of the simulation. Delegates argued a moot court case before their fellow delegates serving as Supreme Court Justices.  Each team then made a “flag” to represent what had impacted them the most and presented it to their colleagues and staff.

Saturday, the last official day, had one last class: Goal Setting, before allowing the delegates to prepare for the Awards Luncheon. The most prominent award given was Outstanding Student to Katlyn Lewis (Home Schooled), runner up Conner Smith (Desert Ridge HS), and second runner up Courtney Schrade (Sandra Day O’Connor HS). The Most Improved Award went to Michelle Zhao (Blue Ridge HS) and Joey Chavez (Shadow Mountain HS). The AZYLC staff would like to thank everyone on another great year!

Stephanie Nadeau was co-Senior Team Leader (STL) for the 2014 Arizona Youth Leadership Conference (AZYLC) along-side three year STL veteran Andrew Stephens. She has been with AZYLC for seven years; starting as a delegate in the summer of 2007. She returned as a Team Leader for four years, served as Assistant Senior Team Leader in 2012 and 2013, and assumed the role of STL for the 2014 and upcoming 2015 sessions. She is in her final year of graduate school and will be receiving her Doctorate of Physical Therapy from NAU in the spring of 2016. Stephanie greatly enjoys working to make the conference run smoothly and hopes to continue working with the wonderful staff for the coming years.