Each year a dedicated group of volunteers work hard to make the Arizona Youth Leadership Conference a great success.

Jeff was a student at the second AZYLC in 1992, and has attended every AZYLC since serving as counselor, instructor and staff.  Jeff works for the Arizona Supreme Court Administrative Office of the Courts as the Division Director for Education Services. In this position Jeff is responsible for the development and delivery of relevant, timely and quality educational programs for over 9,000 judges, probation officers and other employees of the Arizona Judicial Branch.  Jeff is a graduate of the Navy JROTC program at Moon Valley High School in Phoenix, and also a graduate of the University of Arizona. Jeff has three children (two of whom have attended AZYLC) and lives with his family in Glendale.

Cynthia was born and raised in Phoenix, Arizona in 1992. Enlisted in the U.S. Air Force in 2011 as an Operations Intelligence Analyst, stationed in CA and NC and deployed to 14 different countries. Recently selected for Air Force Officer Training School (OTS), she will be commissioning as a Space Officer late 2019.

Cynthia has been involved with AZYLC since her junior year in High School and this year makes it a 12-year run! Returning as a team leader, senior team leader, and for the first time as a Deputy Director for AZYLC 2019. 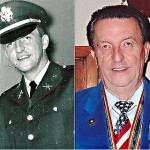 Born in Santa Fe, New Mexico, in 1936. Entered U.S. Army in 1959, served in Vietnam, retired 1990 with rank of Colonel. Served three years as Inspector General, Arizona National Guard causing a long-term dedication to ESGR – Employer Support of the Guard and Reserve. Serves as the ESGR Arizona Central Chairman and briefs over 1,500 personnel during a calendar year. Active in the Military Order of World Wars and Military Officers Association of America focuses on support for young people. Serves as Phoenix Chapter Youth Leadership Coordinator and Director of the annual 5-day conference. Interacts with over 50 local high schools emphasizing American heritage, leadership skills, and free enterprise. Was recognized for his community service by the national Military Order of the World Wars with the Silver Patrick Henry Medallion.